Project overview
International Office for Water (Oieau, as Secretariat of the International Network of Basin Organisations), the African Network of Basin Organisations (ANBO), Ecologic and various African transboundary basins have developed, from 2007 to 2010, performance indicators related to transboundary basin organisations.
The main objective is to assess the progresses of Integrated Water Resources Management (IWRM) policies and programmes at transboundary level.
This project was funded by The European Commission, Cooperation Office EuropeAid, in the frame of its ACP-EU Water Facility programme and the French Ministry of Foreign Affairs.
The performance indicators have been progressively defined, tested and refined on several African transboundary basins. During a first stage this has been performed in cooperation with the following river Basin organisations: Senegal (OMVS), Niger (ABN), Congo (CICOS) and Volta (ABV). The process has been later on shared and extended to Orange (ORASECOM), Gambia (OMVG), Lake Victoria (LVBC) and Lake Chad (CBLT).
Those tests have allowed to validate the feasibility of using indicators and to demonstrate their usefulness thanks to important appropriation from basin organisation employees. Specific project meetings have been organised in Ouagadougou (November 2007), Kinshasa (October 2008), 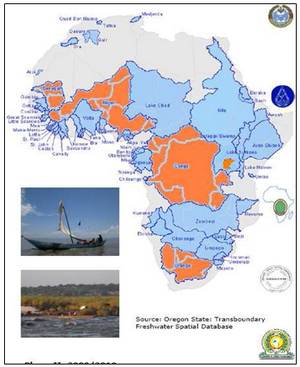 The elaborated performance indicators are tackling both the assessment of governance within the basin organisation and the assessment of on field results from the implementation of IWRM policies and programmes.
More informations : portail@oieau.fr