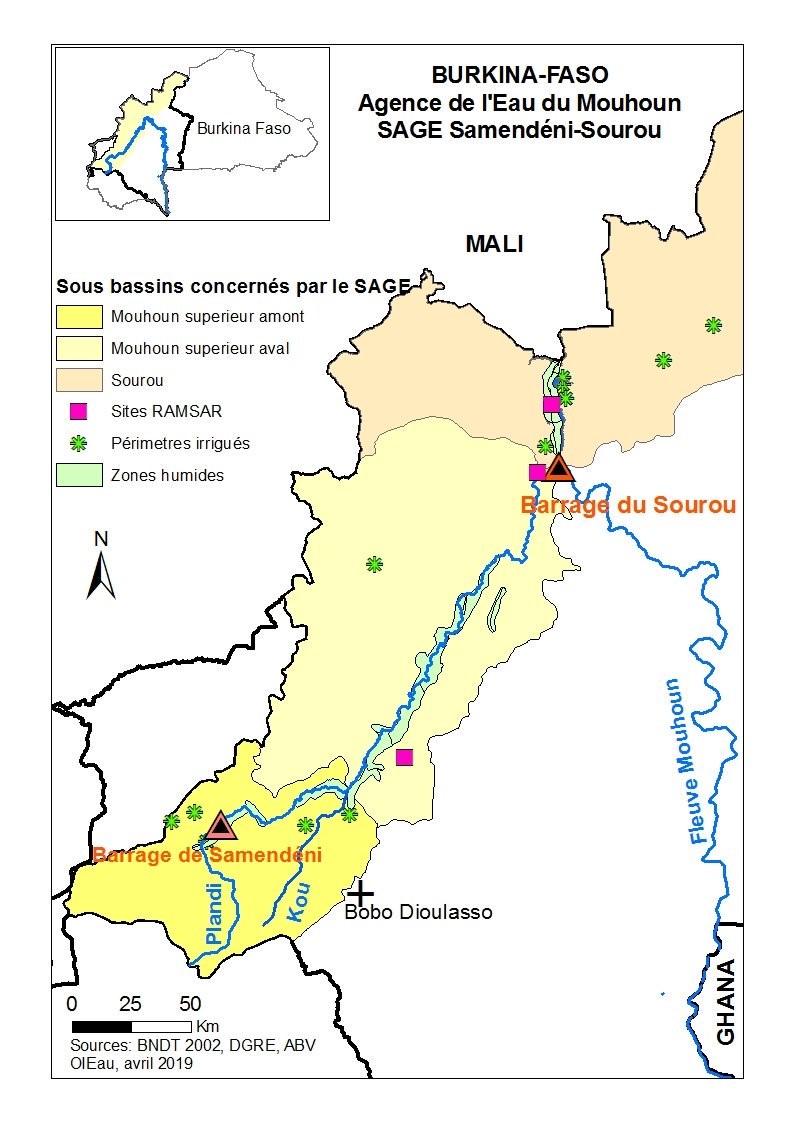 Burkina Faso is located in the Sudano-Sahel region, characterised by variable rainfall (intra and inter-annual) and a considerable level of evaporation that directly impacts the water cycle and runoff. The area is also highly subject to climate change, with a tendency to aridification: increase in average temperatures, decrease in rainfall.

These factors concerning the Sahelian region are combined with the impacts of high demographic growth (annual rate of 3% - INSD 2009), and an increasingly poor and vulnerable population. The financial situation of households in rural areas often depends on the production of their crops or livestock (and sometimes fishing), subject to desertification and deteriorating soil quality:

The upstream part of the Upper Mouhoun sub-basin, located in the Hauts-Bassins region, is drained by the Mouhoun’s two main tributaries: the Kou and the Plandi. The basin’s very dense hydrographic network abounds with springs (some protected), rivers, backwaters and large, shallow water tables (57% of flows at the basin’s outlet come from rainwater and 43% from the water table).

This considerable water potential requires the implementation of integrated management of surface and groundwaters to:

A lack of restoration of arable land since the 1970s has led farmers to exploit undeveloped land. The only remaining cultivatable, fertile land comprises fragile ecosystems such as wetlands (lowlands, river and lake banks) and is gradually deteriorating. In addition, increasing water stress in the area (due to disorganised management of irrigation) has modified the Mouhoun’s banks, altered land drainage and eroded soils. 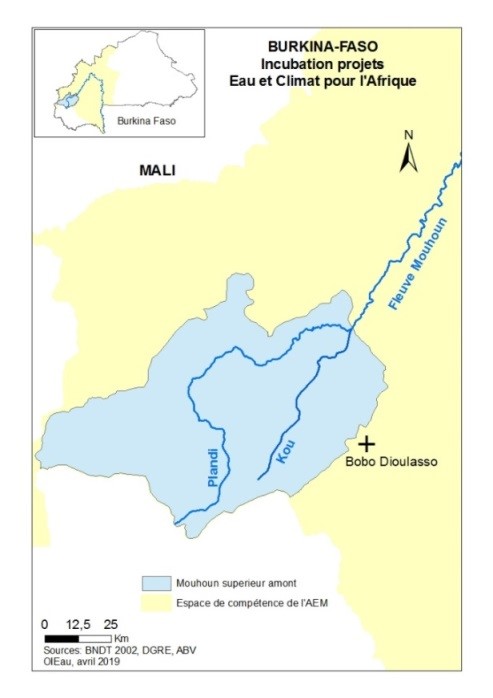 The incubation must ensure the protection, restoration, preservation and sustainable management of wetlands in order to contribute to inhabitants’ food security and combat poverty thanks to improved knowledge and user resilience.

The area of intervention for the incubation is located at the level of the Plandi and the Samendéni Valley (dam filled in 2017, 40km from Bobo-Dioulasso, with a reservoir capacity of over 1.3 billion m3).

The action planned in the project corresponds to the recommendations of the water development and management master plan of the Mouhoun Water Agency (SDAGE 2014-2030), which sets out the following guidelines for the upstream part of the Upper Mouhoun sub-basin:

The project’s activities will, on the one hand, correspond to the main strategic lines of Burkina Faso’s National Policy on Wetlands (PNZH, 2013):

On the other hand, the incubation will directly contribute to the implementation of the strategic lines of the National Plan for adapting to climate variability and change (PANA, 2007):

Protection, restoration, and preservation techniques and sustainable management of wetlands

Hauts-Bassins Regional Directorate for Water and Sanitation (DREA-HBS)
Water police service for Hauts-Bassins (SPE-HBS)
Governorate of the Hauts-Bassins Region
National Meteorological Agency (ANAM)
Managers responsible for the environment, monitoring-evaluation, technical monitoring on the Integrated Development Programme for the Samendéni Valley (PDIS)
Geographic Institute of Burkina Faso (IGB),
Managers responsible for the sustainable management project for wetlands to reinforce food security and the resilience of ecosystems in West Africa (GDZHAO)
ACTEA for synergy in the areas of water and sanitation if relevant
Agricultural producer associations
French Research Institute for Development (IRD)

Techniques for the protection, restoration, preservation and sustainable management of wetlands